All the children, from Junior Infants up to sixth class, took part in a competition from An Taisce. The competition was aimed at encouraging people to become more aware of their use of water. The title of the competition was “Let’s Take Climate Action for Water”. Each child was told to create a poster with a catchy slogan and a bright eye catching picture.

We had some amazing entries to be sent off, so much so that we decided to hold our own presentation. We chose a winner from both the senior and junior end of the school and some runners up- their posters were amazing- we have some great artists here in St. Tiarnach’s!! Well done to those children and all who took part!!!

Here are some lovely examples of the beautiful artwork from the An Taisce competition. 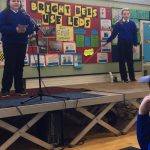 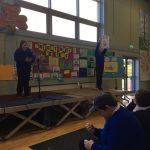 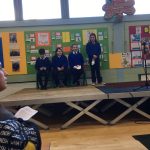 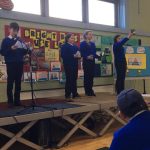 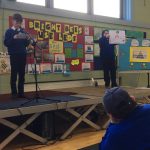 Our “Busy Bees Use LEDs” Presentation

Since our 6th class members of the Green School Committee worked so hard over the last 6 weeks we wanted our parents to see exactly what we have done in our campaign and what we have learned- we hoped to convert a few parents to LED bulbs too!!

Zach, Sophie, Rachel and Ceara were excellent- they explained exactly what we did throughout our campaign- we wanted to make parents and our local community aware of the benefits of using LED bulbs instead of the traditional bulb. To do this we researched the advantages of LED bulbs and put this information on fliers and posters before distributing them around our school and different shops and businesses throughout Clones. We also invited a guest speaker form the ESB to come in and teach the children in 5th and 6th class about sustainable energy. This was very beneficial to our campaign.

The last big event in our campaign was our presentation about LED bulbs- we invited parents into the school and the children on the team gave a wonderful presentation, in it they explained exactly what renewable and non- renewable energy was. They then explained the differences between LED bulbs and incandescent bulbs and also gave a run down on the cost savings people will have if they change all bulbs to LED bulbs. The photos above are a few snaps from the presentation- well done to our Busy Bees!! Our entry to The One Good Idea competition has been submitted and we will hear the results at the end of March.

We at St. Tiarnach’s would like to congratulate our 6th class members of the Green Schools Committee, who have fought very tough competition throughout Ireland to make it to the second round of the SEAi (Sustainable Energy Authority Ireland) competition for “One Good Idea”. They are one of the 30 primary schools nationally and the only school in Ulster to make it to this stage… A massive achievement already!!!

The competition’s aim is to allow children to run a campaign designed to encourage parents/members of the community to change one simple thing in their life style which will help save energy in our environment.

The children came up with the very clever and simple idea of using LED lights as opposed to the traditional bulb. They also came up with a very effective slogan “Bright Bees Use LEDS”. The focus of the campaign will be on the ‘Use Less, Use Clean’ idea which is so important in today’s world!

They will be activating the campaign in the coming weeks- using posters, fliers, logos, slogans and social media to advertise their ideas. Please keep an eye out and support the campaign in any way possible!!!

We have a newly reformed green school committee in St. Tiarnach’s. Over the years we have worked very hard at various ‘green’ initiatives and earned 6 green flag awards. The themes we worked on were

Our new Green School committee’s job is to maintain these 6 green flags which is no mean feat! At the moment we are really concentrating on

We have a very enthusiastic committee made up of children from 3rd, 4th, & 5th class. We have bin monitors who regularly patrol the corridors and check the bins, lights, switches & taps in each classroom….and they are very strict!

If anyone has used batteries, we are collecting them to support Barretstown (who help rebuild lives affected by Childhood Cancer)

It’s been a very busy couple weeks for our Green Schools Committee. Since it’s National Spring Clean month we’ve been doing our own cleaning. We did some litter picking in and around the school, hoping to encourage the rest of the children in the school to learn from our example. So much work was done by the committee which emphasised their strong commitment to keeping our environment safe and healthy.

Along with our own spring cleaning we went down and helped out with Clones Tidy Towns; something that was greatly appreciated by all involved!

After careful consideration, it was decided that 2nd class up to 6th class would write a poem inspired by the environment while the Junior Infants to 1st class created posters. There was a great response to the competition and it was very difficult to choose from the many entrants.

Four winners were chosen and they received some great prizes!!

Since it’s coming into the summer term here in St. Tiarnach’s (or what is supposed to be summer!!!) we decided to do some planting in the polytunnel. It has been a great success, giving children from throughout the school an opportunity to ‘get their hands dirty’ and learn about the various plants, flowers, vegetables and fruit that can be planted this time of year. The Green Schools Committee have also been busy helping the Junior Infants with their “Incredible Edibles” project. This project involves the Junior Infants planting their own vegetables in the polytunnel and looking after them over the next few weeks.

The polytunnel has only gotten up and running in the last couple of weeks but we hope to see great results by the end of the summer term!! It gives the children a chance to see where the veg on their dinner plates really comes from!!! It also highlights the responsibility and care that needs to be taken in order to allow the veg/plants to grow in a healthy environment…. A great learning experience.